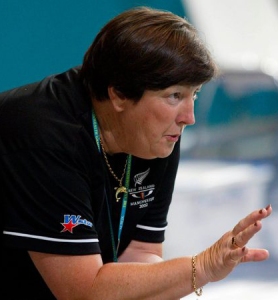 It is with great sadness that we received the news of the passing of Jan Cameron. We are all aware of Jan’s magnificent coaching career and achievements. We would like to take this opportunity to reflect on the influence that Jan had on those around her, especially during the last 5 years which she spent living at the Sunshine Coast (QLD).

Jan originally moved to the Sunshine Coast to retire but took on the Para Coaching position at the University of Sunshine Coast (USC) from 2013 through to the 2016 Rio Paralympics. During this time Jan built the number of athletes within the USC program and catered individually for the needs of each of the athletes. Jan would often coach athletes outside of her coaching hours to make sure their work, school or university schedules were met. Jan would always build a strong relationship with her athletes and took the time to learn about them, their families and their lives. She would offer advice and always had plenty of stories or anecdotes to share with her charges, at the same time her athletes learnt that Jan was invested in achieving their desired results and would never compromise performance. They respected her and appreciated the leadership she gave them.

Since 2017 Jan performed the role of Para Mentor Coach for Swimming Australia. Jan was at her best in this position and mentored coaches successfully on the recent Commonwealth Games Team. Jan was straight to the point and would advocate for coaches, women in sport and people with disabilities. It was always about common sense and what was the right thing to do, Jan would not tolerate anything less. Jan influenced so many people across the swimming fraternity including athletes, administrators, sports scientists and coaches. Many people were touched by her kindness and the way in which she cared for athletes and coaches, always putting them first. The landscape of swimming will change with the loss of Jan Cameron, a great role model and mentor has been taken from us and we will miss her.

Our prayers and thoughts go out to Jan’s family, Husband Kevin and Son Scott.

Click here and enter your email address to receive our eNewsletter